Aside from writing a hair over 3,000 words today, a friend and I also set the base post for my first attempt at giving the Starlink dish enough altitude to “see” over the treetops.

Here are a couple pictures of the completed work: 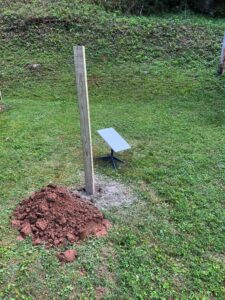 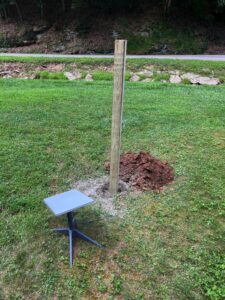 The plan is to use the post in the picture above as a base and attach a 16-foot post to it with a hinge, and because I over-engineer everything, I’m going to secure the mounting post to the base post with three 2x4s instead of just one.

Using a hinged setup will allow me to access the dish without a ladder if I ever need to, but honestly, I’m a little concerned about the overall weight. We’ll see what it’s like once the upper post and dish are mounted.

But setting the base post was not the end of my productivity for the day.

I had a terrible time concentrating once the post was set. I was too excited about finishing the project. I managed to finish the chapter I was working on–but just barely–and spent another couple of hours trying to talk myself out of what I’m sure many will say was a damn stupid idea.

Namely… doing the prep work for the mounting post.

It was around midnight when I finally gave into my excitement and eagerness, and I’m glad I’d picked up a light panel from RIDGID in addition to the various other power tools. It came in very, very handy. It took me a couple trips to carry everything out there, but it wasn’t long until I could get to work.

I used the post level that came in so handy during the earlier phase of setting the post to provide a straight edge as I measured four feet above the ground. 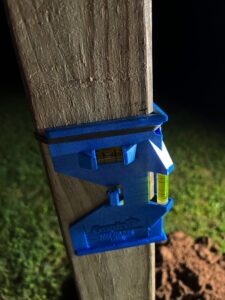 Once I had a cut line, I used a couple 6″ clamps and plastic (or resin) speed squares as a cutting guide. Given that it’s a 4×4 post, a regular circular saw won’t cut through it completely, so I used a reciprocating saw (usually shorthanded to ‘sawzall’ by a lot of people) with a 9″ wood blade.

I will forgive myself for cutting the post at a slightly upward angle.

I’m going to sand the top of the post to be level, both to counteract its slight lean and my less-than-perfect cut.

Once it was cut, I used the post level again to be sure I mounted the hinge as close to square as I could manage (third picture).

But, here’s the result: 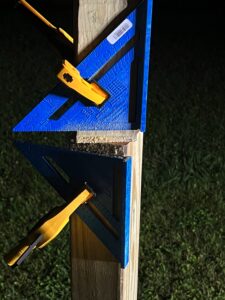 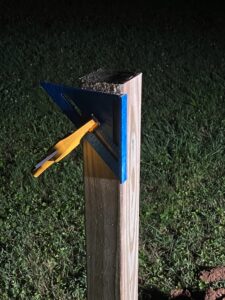 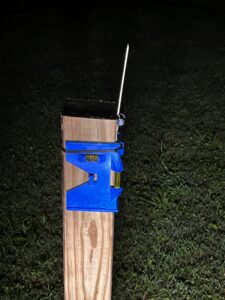 The last piece of prep work I did was to drag the 16-foot post over to the “work site” and attach the 2x4s that will secure it to the base post. I took a few pictures, but given the ambient light and my lack of proper sawhorses, they didn’t turn out as well as I would’ve liked. So I will do the world a favor and not publish them.

Just as I was about to pack everything in, I had a wild thought and decided to mount the Starlink dish to the base post for the time being to see what difference–if any–being four feet off the ground would make.

I’ll test the new location for a couple days before I attach the mounting post.