I’m starting this update at 5:04am on Monday, the 15th of August. I made specific mention of that, because I had another weekend project (specifically a Saturday project) that kicked my butt.

I’m very pleased that it kicked my butt less than building the shelves did. So, I feel cautiously hopeful that I’m making minor progress in getting myself closer to healthy. To be clear… I don’t feel unhealthy, per se. I just feel that I could be healthier than I am, and I want that.

Saturday started off with setting a new post for my mailbox (with the help of a couple neighbors), which was a carryover from events of the 12th that I’m not touching because feelings of frustration and being fed up rear their unwelcome heads at the mere thought of that snarled ball of ugly.

After finishing with the post, a neighbor and I set in on building the new roof for my parents’ well house. We made excellent progress and probably would’ve finished it completely, except that we needed materials due to an evolution of the design (my design) during the construction process. 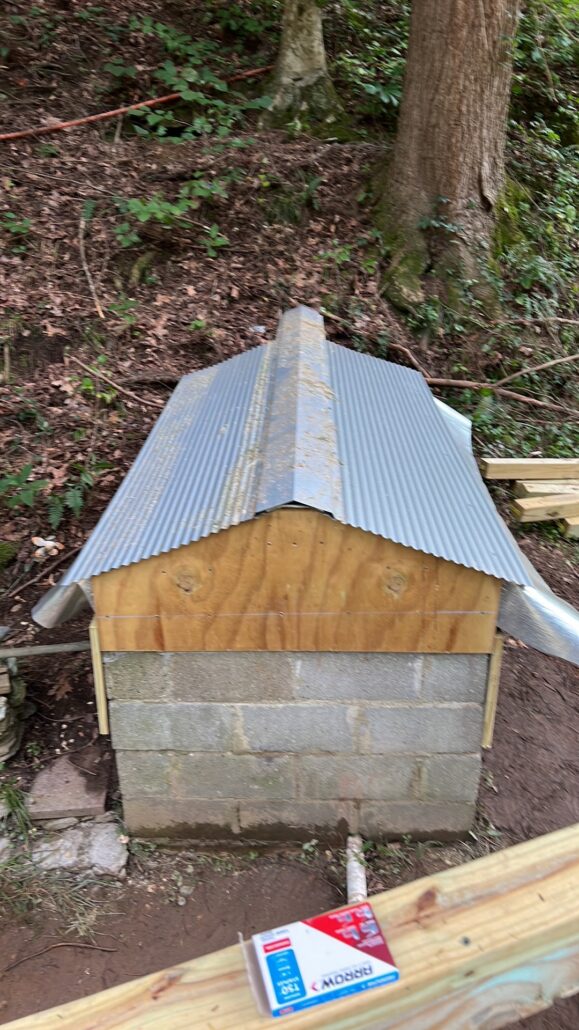 You might have noticed the two pieces of wood that appear to be mounted to the frame of the roof and extend down to the blocks. I’m glad they appear that way, because that’s exactly what they do.

I designed this roof to roll mostly off the well house and be supported by two 2×4’s that are hinged to the underside of the roof. The four casters I bought at Lowe’s roll very well, and we applied ‘parking brakes’ to keep the roof in place until we can finish the work.

At one point, we paused construction to set the superstructure of a neighbor’s bridge that had been washed away in Thursday’s (i.e. 11 August) flash flood. This was the second year in a row that we’ve had a flash flood this time of year, which was more of rarity in my youth. Even as recently as five years ago, flash floods around here were rare.

By the end of the day, various neighbors (and a couple cousins) visited the work site, which was nice. I don’t normally think of myself as a people person, but I’m slowly beginning to question that conclusion based on accumulating evidence. Perhaps… it’s not that I’m a people person so much as more social than I have traditionally thought.

As far as writing goes, I’m still getting ramped up for August. I freely admit that I shouldn’t need to get ramped up each month, but for whatever reason, the first six to nine days of the past few months have been a challenge for me.

I’m within approximately 9,000 words (plus or minus) of finishing Dawn of the Sorcerer, and that’s close enough to eat at me about finishing it. I’m going to focus on it this week and hand it off to my awesome editor before returning to The Fall of Skullkeep and Tempus. I’m not sure which of these (i.e. Skullkeep or Tempus) will technically be my next published novel, and I may end up publishing both at the same time. We’ll see.

Speaking of Tempus, I received a message through my author page on Facebook a few days ago, and he asked about the fate of Ursus, which was the title of Primogenitor #4 that I announced at the end of Consular Times. The simple fact is that I’ve learned not to announce titles at the end of novels, not unless I’m already very confident of what I want to write.

To make a long story short… Tempus is Ursus.

As I set in on writing Primogenitor #4, I realized that the title Ursus didn’t fit the story I wanted to tell. So I changed it… to Tempus.

All right. I think that’s enough from me for now.

I hope the days treat you and yours well. Be safe out there.